When I started this project I was foolish enough to think that I could walk or drive to each townland.  I didn’t realise that some townlands were actually islands. Nor did I foresee a time when exploring townlands would be impossible because of a pandemic. Today I’m using photographs taken long before the lockdown began.

In Strangford Lough, east of the peninsula of Ringhaddy, lies an island called Islandmore.  The island measures 128 acres and counts as a townland in itself. 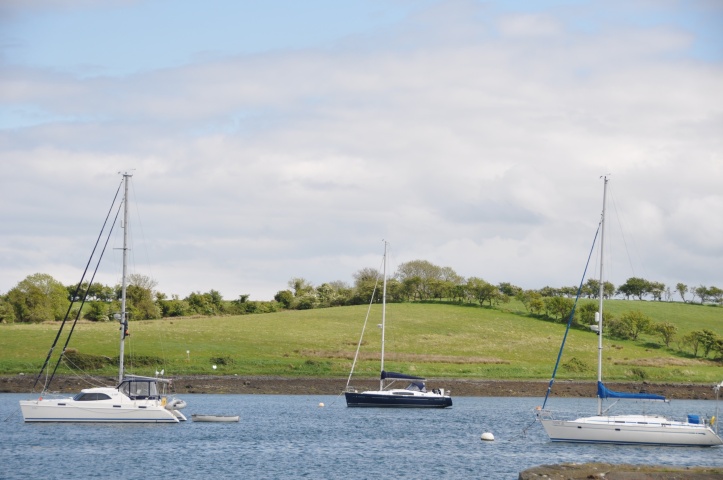 The land behind these yachts is Islandmore.  I took the photographs from dry land in Ringhaddy townland.

According to the website of the Northern Ireland Place Names Project, the name Islandmore comes from the Irish An tOileán Mór meaning “the large island”.  Across the rather large island of Ireland there are about a dozen other townlands called Islandmore – not all of which are on actual islands. At least this one is a real island surrounded by water.

This townland has become well-known thanks to two books by Michael Faulkner, who lived on Islandmore with his wife Lynn. In the words of the author, “access is boat-only, there is no mains electricity and apart from Eddie the west highland terrier and a cross-section of the wildlife for which Strangford Lough is justly renowned, Lynn and I were the only inhabitants during the twelve years we spent on the island.”

The books are “The Blue Cabin – Living by the Tides on Islandmore” and “Still on the Sound”.   You can just about see the Faulkner family’s blue cabin in the next photo.

Which county is Islandmore in?   County Down