There’s no reason why a blog about townlands should hibernate, but I am only a fair-weather photographer.  So I’m starting the New Year with a townland that I visited last summer.

If you could push the grass aside, you’d find a sign for the Bar Hall Road in the townland of Tullyboard.

Tullyboard covers the southern part of the town of Portaferry, on the Ards Peninsula in County Down.  This was my view of Tullyboard’s houses as I crossed the lough on the ferry from Strangford. 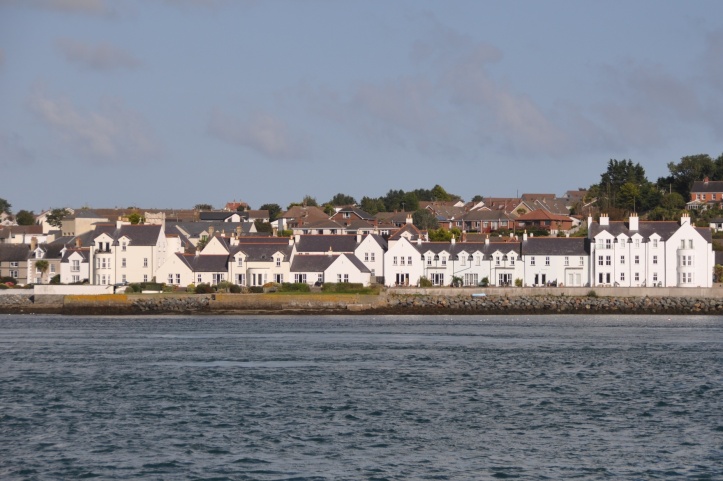 According to the PLACENAMESNI website, the name Tullyboard may come from the Irish Tulaigh Boird  meaning “hill of the flat top or table”.  Which could easily refer to the place where this bench is located.

The stone building behind the bench is Tullyboard windmill.

The windmill was built in 1771 by the Savage family.  It had two sets of mill stones, but it was completely destroyed by fire  in 1878, leaving only this stump.

Close to the windmill is St Patrick’s Church.

This Catholic church has been extended and renovated several times, but a sign from 1762 still commemorates the original builders, asking that “All you good Christians pray for ye Benefacters of this chapel which was biult by the masons Dorians and M Henery Murland Carpender”.

Heading south from Portaferry, the road hugs the coast.

A friend who lives in Tullyboard showed me the seals in Granagh Bay.

I couldn’t really decide if that seal claimed allegiance to Tullyboard or to the next townland of Granagh, so here’s another image of two seals, each looking in a different direction.

Which county is Tullyboard in?   County Down

Which townlands border Tullyboard?  To the north, Ballyphilip and Parson Hall.  To the east, inland, Ballynichol and Ballytrustan.  To the south, along the coast, Granagh.

Click here to see a map of Tullyboard on TOWNLANDS.IE.