Today’s townland is “Demesne of Down”.  It is a large townland, covering more than 1200 acres of the town of Downpatrick.

“Demesne” describes land surrounding a manor or large house, actually occupied by the owner and not held by tenants.

“Down” or “Downe” was the usual English name for the town of Downpatrick until the 17th century.  The name comes from the Irish An Dún meaning “the fort”.   In the 21st century we still use “Down” for the names of the county, parish, townland and cathedral.  Here is a view of Down Cathedral, as seen from Inch Abbey.

On the other side of the cathedral is the grave of Saint Patrick.  It is said that the remains of three saints were re-interred here in the 12th century – Saint Patrick, Saint Brigid and Saint Colmcille.  The granite stone was placed on top of the grave in 1900.

My next stop was the exhibition at the Saint Patrick Centre, a short walk down the hill from the cathedral.  The exhibition reveals how beautiful Ireland is, and how little we know for certain about its patron saint.  This is a screen shot from one of the films in the exhibition. 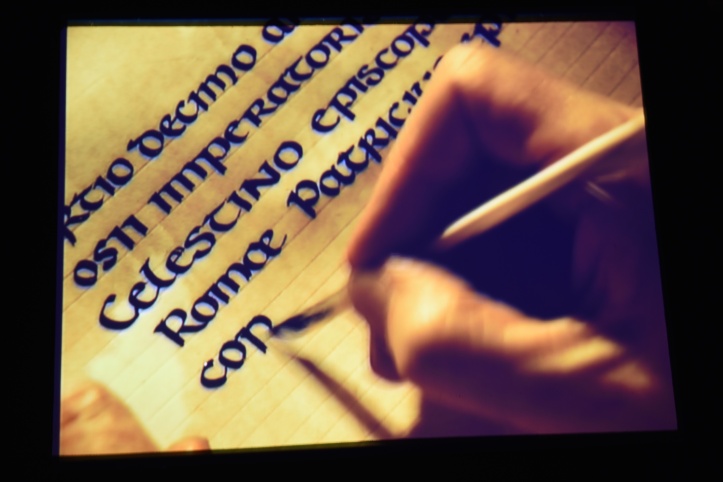 After filling my arms with leaflets from the Centre’s tourist information office and gifts from their shop I finally sat down for lunch at their Garden Cafe.  I forgot to return my comment card, but I would have given them top marks for food and service.  The cafe is a social enterprise, working with the charity Stepping Stones NI, to help people with a learning disability or learning difficulties to realise their full potential for a better future.

In case I give you the impression that Demesne of Down is all trees and ancient history, let me add that Downpatrick has more than its fair share of shops and traffic jams.

It also has a racecourse, as you can see from this sign, which displays the street name and townland name in both Irish and English. 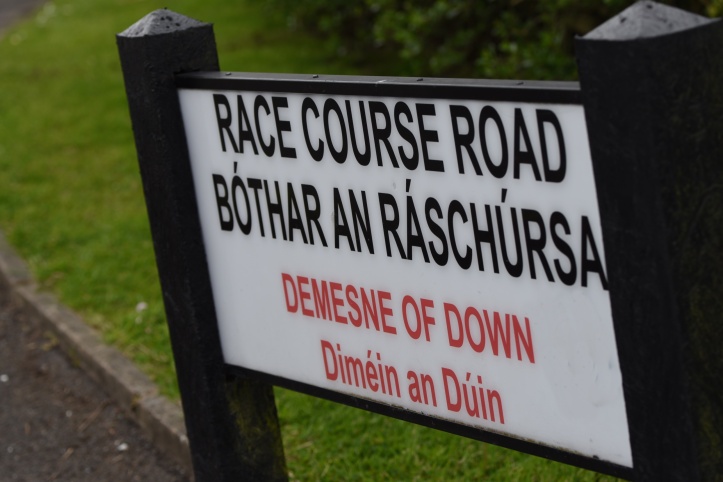 Horses and jockeys should watch out for a townland boundary as they gallop along.  Downpatrick Racecourse is divided between the townlands of Demesne of Down and Ringreagh.

Which county is Demesne of Down in?  County Down (of course).

Which civil parish is Demesne of Down in?  Down (of course).