Today’s townland is Ballynichol, near Portaferry.  The townland name is printed in red on this sign for the Ballyfounder Road which runs through Ballynichol.

County Down has two townlands named Ballynichol.  I wrote about the one near Comber back in November 2015 – click here to read about that other Ballynichol.

The history of the name is similar in both cases, starting with “Nicholstown” in the Anglo-Norman period, with the name then being gaelicised as Baile Niocail and in turn re-anglicised as Ballynichol or Ballynickle.

This gravestone for the Lennon family in St Patrick’s churchyard, Tullyboard, is inscribed with the spelling Ballynickle.

In my post from the Comber Ballynichol I used several (maybe too many?) images of gates, so I shall restrict myself to just one from this Ballynichol.

That gate is the entrance to the sportsground of St Patrick’s Gaelic Athletic Club on Ballyfounder Road. 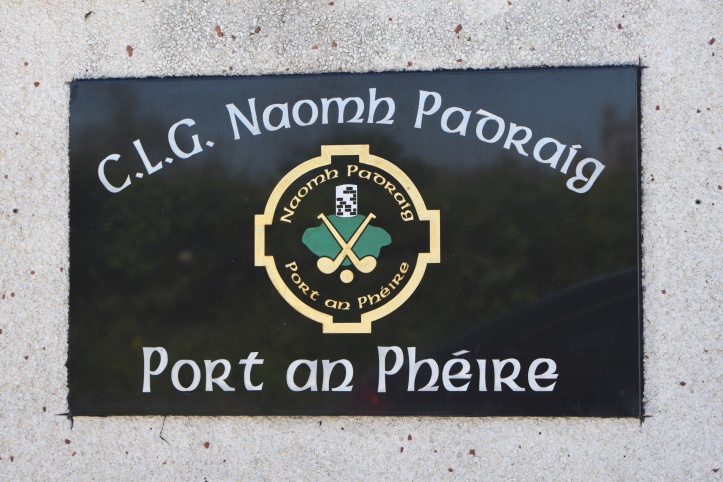 Nobody was playing when I visited.

No score, and no spectators.

Looking at the club’s Facebook page, I can see that they do actually have a successful club for camogie and hurling, and deserve good wishes from this blog, so…. “Up the Ports!”

Which county is Ballynichol in?   County Down

Click here to see a map of Ballynichol on TOWNLANDS.IE.