When I had finished exploring Town Parks of Donaghadee and Ballyvester a few weeks ago, I drove away from the coast along the Craigboy Road.  As the road moved inland, it climbed and it zig-zagged.

These aren’t gentle bends – they are almost right angles.  At one of them I stopped to admire the view back towards the coast, with a hazy glimpse of Scotland across the Irish Sea.

One advantage of being on a winding road was that I was forced to drive so slowly that I didn’t even disturb the wildlife.

While looking at the Craigboy pheasant, I can tell you something more about the name of the townland.  According to the PLACENAMESNI.ORG website,  17th century records show the name as “Creboy” and “Ballycreboy”, indicating that the name probably has nothing to do with the Irish creig meaning “rock”, but instead came from An Chré Bhuí  meaning “the yellow clay”.

I am developing a habit of photographing gates and fences.  Perhaps I can learn something from them about the culture or history of different parts of Ulster’s farmland, but for the moment I just like the way the sun glints off these metal bars.

Back down on the coast, in the Templepatrick graveyard in Miller Hill townland, I found a gravestone from 1820 for a family in Craigboy. 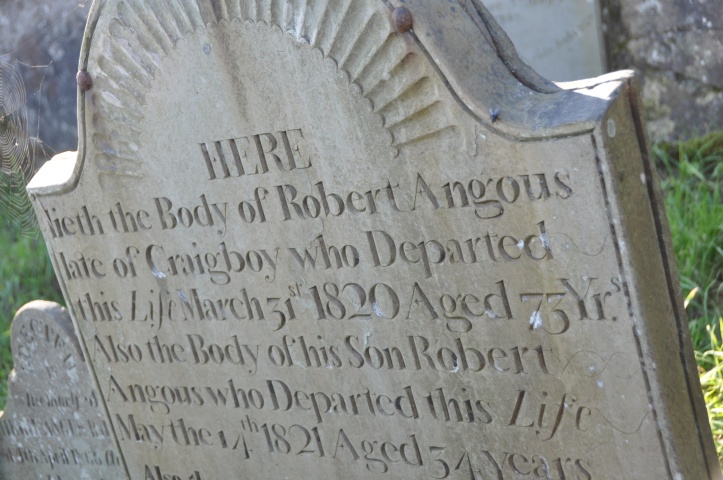 Which townlands border Craigboy?   To the north, Ballyvester.  To the east, Miller Hill and Templepatrick.   To the south, Ballycopeland.  To the west,  Killaghy.

Click here for a link to a 19th century map of Craigboy on the website of Ordnance Survey Ireland.

Which civil parish is Craigboy in?  Donaghadee

Which council area is Craigboy in?  Ards and North Down Borough Council

Which county is Craigboy in?  County Down